On 7th February I spent the day birding around the Exe, which included a visit to Bowling Green Marsh. Scanning the Black-tailed Godwits roosting on the estuary mud from the viewing platform, I was excited to see one showing the Axe Estuary Ringing Group colours of 'yellow, red, yellow' on its only visible leg. The bird stubbornly refused to put down its other leg which would have revealed a unique colour combination, thus allowing me to identify when the bird was ringed & any other sightings.

However, I then spotted another bird standing nearby which was also colour-ringed, although not with the Axe colours. This one had a light green ring over a dark green one on its left leg, and an orange ring over a paler orange ring with an inscribed black Z on the right leg.

On 12th February whilst in the Tower Hide at Black Hole Marsh  I was surprised to see a light green ring over a dark green ring on the leg of a roosting Black-tailed Godwit. After quite a wait, it finally put down its other leg, and revealed that it was the same bird, with its 2 orange rings & black Z.

I then set about trying to track down the origin of the rings. The usual place to find a colour-ring project is at cr-birding.org, but not this time. I finally managed to identify the project via the International Wader Study Group website's Colour Mark Register which indicated that the bird had been ringed in Iceland. I emailed the the details of my sightings, and the next day received a reply confirming that the bird, (a female, metal ring number 635383), was ringed in Auðsholt in Southern Iceland on 10.6.2017. The bird has been sighted on 69 occasions since that date.

The locations where the bird was ringed in Iceland, and the subsequent sightings are shown on the map below: 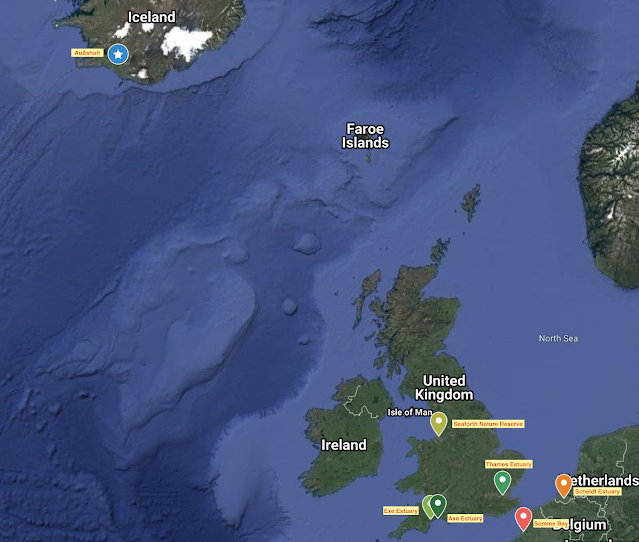 In order to visualise the movement of the Godwit over time, I've attached a chart to show where the sightings have occurred over the 6 years. This provides a rough estimate of the bird's actual location as it's obviously based only on the available sightings. There are therefore large gaps, and there may have been 'comings-and-goings' between the sightings at one location, whereas it's shown present between the start & end dates. A colour block for a week means that the bird was present for at least one day within that week and not necessarily for the whole week, and the number within the colour block indicates the number of sightings within the period shown.
If you see any colour-ringed birds on the Axe Estuary, please email your sightings to Ian Stanbridge, and you'll be able to find the bird's history.  More information on colour-ringing projects on the Axe Estuary can be found here,  whilst information on the importance of colour-ringing projects for the monitoring of bird populations & their movements can be found here.
Update:
The Black-tailed Godwit has been seen again on the Axe, this time on 18th Feb at 1600hrs near Borrow Pit on Seaton Marsh. Thanks to Susie Joy who spotted the bird & took the photo.
Posted by Sue at 12:06